Bancor is the world’s first decentralized liquidity network. It is designed to enable cryptocurrency traders, liquidity providers, and developers of the DeFi world to engage in the ever-expanding financial marketplace. The Bancor community has a strong presence on social media, which has made us curious to find out more about this innovative DeFi solution.

In this review, we’ll discover how the Bancor network functions, its underpinning mechanisms, and how this liquidity protocol compares to traditional crypto exchanges. Read on!

The Bancor Team and Their Crypto Initiative

Founded in 2016 by the Bancor Foundation, headquartered in Zug, Switzerland, the Bancor liquidity protocol was developed in the Research and Development Center in Tel Aviv-Yafo, Israel by Galia Benartzi, Eyal Hertzog, and Guy Benartzi. In the premises of the R&D centre, the Bancor development team, composed of highly experienced blockchain technology professionals, managed to conceptualize the first DeFi network that enables fast and easy cryptocurrency exchanges without an intermediary.

In 2017, the Bancor team’s initial version of their on-chain liquidity protocol was fully developed. The first Automated Market Maker (AMM) presented through their aptly titled Bancor 1 project aimed at overcoming the liquidity problem when thin order books couldn’t assure investors on both sides of the trade.

In 2020, Bancor developers continued to resolve the AMM pool’s issues. In the second Bancor version, the team addressed two of the most pressing issues with AMMs, responsible for sweeping out billions of dollars in crypto assets every year – the forced token exposure and the impermanent loss (IL).

As a result, the team developed a single-sided liquidity tool and added IL protection to ensure there was no chance of impermanent loss when staking your tokens on the Ethereum network.

The Bancor 3.0v (Dawn) is yet to see the light of the crypto ecosystem. This multi-chain liquidity solution will come equipped with instant and third-party IL protection, double rewards for the BTN holders, composable pool tokens, a new front-end, tokenomic redesign, multichain functionality, auto-compounding, liquidity direction, infinity pools, and more.

The Bancor team encourages you to join the waiting list by leaving your email on the site to be notified of the Bancor 3.0v release. There’re also plans for Sunrise (Bancor 3.1v) and Daylight (Bancor 3.2v) updates that are supposed to enable users to earn more while trading less.

About the Bancor Liquidity Protocol

Bancor is an on-chain liquidity protocol that makes it easy for crypto traders and liquidity providers to quickly swap two different types of tokens. It enables the decentralized exchange of tokens on the Ethereum blockchain and other blockchains. The Bancor algorithm serves as an automated pricing estimator.

This software allows you to convert any type of Ethereum token into any other token by precisely calculating the equivalent amount of the exchanged cryptocurrency. Bancor’s formula provides this financial operation by an algorithm that determines the value of a token by analyzing the market cap and the token’s liquidity.

How Does Bancor Exchange Function?

The Bancor liquidity protocol functions like a crypto exchange in the way users can obtain and trade various digital assets, but the mechanisms behind these platforms are very different. A few key features set Bancor apart from other crypto exchanges. One of them is the autonomy of transactions.

The Bancor liquidity protocol functions like a crypto exchange in the way users can obtain and trade various digital assets, but the mechanisms behind these platforms are very different. A few key features set Bancor apart from other crypto exchanges. One of them is the autonomy of transactions.

To begin with, transactions on the Bancor network do not involve any third parties or even two traders. Both centralized (CEX) and decentralized (DEX) cryptocurrency exchanges match buyers and sellers, but every trading operation on Bancor is automatically executed against a smart contract.

The second most important difference between Bancor and the traditional crypto trading platforms is the continuous liquidity. For example, with CEXs, the exchanges’ liquidity may be linked to their popularity.. The exchange’s liquidity decreases as the number of active traders and the volume of trades on the exchange drop.

Bancor tackles this issue by creating an algorithmic pricing system, which raises the price of a token and its quantity with each buying order. As a result, tokens on the Bancor Network are continuously accessible for the buyers, disregarding the current trading volume.

When you want to purchase a token through a standard crypto exchange, the buying price will be different from the selling price of the same token. The difference is known as the ‘spread’ in the crypto industry. Through the spread, exchanges generate revenue from each transaction.

Things are different on Bancor, as there are no spreads involved. The cost of selling and buying tokens on the Bancor network is the same because of the implementation of the Bancor Formula.

Traditional crypto exchanges have order books, i.e. lists of possible buy and sell orders. Because this list is constantly changing, it’s hard to figure out how much price slippage there’ll be if an order needs more than one trader to complete it successfully.

Since all prices on Bancor are determined using a unique formula, the price change before you trade a digital asset on the Bancor network is easily predictable, which correctly determines the price slippage.

The Bancor Network Token (BTN) makes it possible to automatically convert any given token into other tokens on the Bancor network. Unlike the typical cryptos, this smart token is a digital currency with an in-built cryptocurrency converter. This converter enables any cryptocurrency to be immediately converted into any other token from the respective network (a process referred to as a ‘cross-chain conversion’) straight from the digital wallet of the Bancor user.

Bancor has witnessed approximately $1.5 billion in token conversions on its network since the initial coin offering (ICO), entirely supported by the native BNT token. BNT can only be acquired with Tether (USDT) or Bitcoin (BTC). It can also be exchanged using US Dollar (USD) as a futures instrument.

What Is a Liquid Token?

There is a new type of cryptocurrency called Liquid Token™, built upon smart contracts. As they have a single pool of tokens that serve as backup collaterals, Bancor’s liquid tokens operate as an automated market maker that controls the buying and selling of a token according to an agreed-upon price curve.

The Bancor Formula keeps the value of a liquid token the same as the value of the linked tokens. It calibrates rates to stabilise both selling and buying volumes instantaneously.

There is no need to match two crypto investors to trade liquid tokens on Bancor Network. This segregates liquidity from the transaction volume and exchange listings, which makes these tokens less volatile to trade.

Bancor allows its customers to purchase ETH tokens with their credit cards through the payment processing company Simplex. It’s important to note that Bancor does not support fiat currencies, as it mainly focuses on crypto-to-crypto trading and conversion. 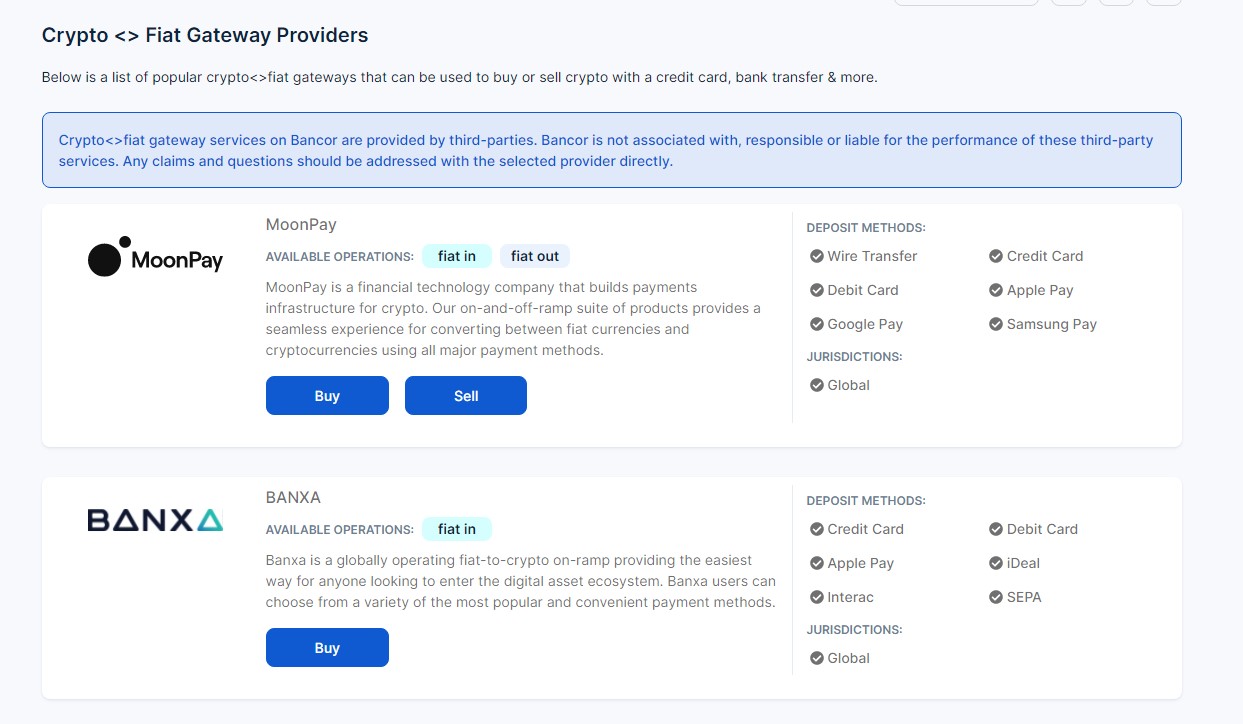 There are no trading fees for converting tokens on the platform. There are no withdrawal fees either, as no funds are held on the Bancor platform.

Is Bancor Safe to Use?

Bancor is an entirely decentralized crypto exchange, meaning that it strives to offer financial freedom to its users. Hence, the trading platform does not follow the stringent KYC user authentication procedure that demands sensitive data from the traders.

Moreover, all trading procedures on the Bancor network can be handled without the participation of third parties, decreasing the chance of data leaks.

On July 9, 2018, Bancor was targeted in a cyber assault that resulted in $23.5 million damages as attackers withdrew over 25,000 Ethereum tokens and other cryptocurrencies from the platform. Allegedly, a hacker gained access to a Bancor wallet used for updating the smart contracts. As a result, the Bancor Foundation decided to temporarily freeze all Bancor Network tokens (BNT), averting a larger-scale financial loss.

Does Bancor provide a crypto wallet?

Yes. Bancor’s crypto wallet has a user-friendly interface that is easy to use. It comes with an in-wallet conversion mechanism that can convert more than 140 EOS and ERC20 tokens so that you can conveniently manage your digital assets and adapt to the market fluctuations on the go.

Through the transaction history function of the Bancor wallet, you can examine all your token transactions and also every conversion you do on the Bancor network.

Does Bancor have a mobile app?

No, Bancor does not offer a mobile application, but don’t let that deter you from using this innovative technological solution of the DeFi world. Users may access the Bancor network through its website. The web platform of this exchange is easily navigable on mobile devices and desktop computers.

ETHBNT is a token that represents the shares in the ETHBNT liquidity pool. ETHBNT token owners receive a cut from all the ETH transaction fees paid to the Bancor platform.

In this regard, the ETH: BNT liquidity pool is similar to other Bancor Network liquidity pools like DAI: BNT and BAT: BNT, which execute conversions and generate revenue from DAI and BAT conversions made through the Bancor network.

A Few Words Before You Go...

The Bancor protocol addresses the concerns of low liquidity and low adoption that have plagued the cryptocurrency industry. For a long time before the introduction of Bancor, it was challenging to swap one token with another one.

However, by automating liquidity, the Bancor protocol developers succeeded in creating a way of maintaining high liquidity on the exchange platform with minimal effort on behalf of the traders and – most importantly – without the need for intermediaries or high trading volume from the liquidity providers, i.e. the LPs.

Gareth is incredibly passionate about sharing his knowledge in the crypto industry. It's important to make informed decisions in crypto and it's Crypto Wisdom's goal to make this information widely accessible.