Liquidity protocols are a growing trend in the crypto industry that revitalized decentralized exchanges (DEXs). These next-gen exchanges use automated market makers (AMM) protocols and dynamic market protocols (DMM), allowing individual participants to become liquidity providers by granting them access to an unlimited number of liquidity pools and DeFi markets.

The idea behind liquidity protocols is to improve issues related to high network fees and liquidity concerns that DEXs face. Unlike traditional DEXs — where the liquidity of a trading pair is sustained by providers that fund smart contracts with two tokens in an equal proportion — the providers add their tokens into the pool and the smart contract returns a proportional amount of liquidity pool tokens to represent their stakeholder.

If you still feel confused about how liquidity protocols work, read our review on Kyber Network. We will explore Kyber’s main features and help you understand the mechanism behind DMMs.

Kyber Network Crystal Legacy, or simply Kyber Network, is a fresh player on the crypto scene — its testnet version was released in August 2017, followed by an ICO the next month, where the company managed to raise 200,000 ETH in a single day.

The liquidity network became available to a group of whitelisted users at the beginning of 2018 and launched its beta version to the public in March 2018. Since then, Kyber Network has grown over 500% in trading volume with over 1 million user transactions and a market cap of $390 million.

Kyber Network operates as a fully decentralized protocol that provides liquidity for dApps and allows token swaps between ERC-20 tokens without relying on a third-party intermediary.

The Kyber Network was co-founded by Loi Luu, Victor Tran, and Yaron Velner, and it’s located in Singapore. Before the Kyber project, Loi Luu was part of the team behind the decentralized mining pool SmartPool and a developer for Oyente, which is considered the original security analyzer for Ethereum contracts.

Moreover, the project has caught the eye of Vitalik Buterin — the founder of Ethereum, who became one of the main advisors in the Kyber team.

How Does Kyber Work?

The Kyber Network runs on the Ethereum blockchain, but it’s also compatible with other smart-contract-based networks. You can instantly swap Ether (ETH) and the whole range of ERC-20 tokens with guaranteed liquidity through the network’s native exchange KyberSwap, without undergoing a KYC or any other form of verification.

Kyber provides liquidity reserves by aggregating liquidity from both external DEX services and its own liquidity pools. Users can simply send their tokens from any exchange that supports the Kyber network and ask for another asset in return. The Kyber network will automatically scan through all available reserves and return the desired token at the best exchange rate at that point.

This is a great opportunity both for individual traders and corporate businesses as it allows retailers to accept all types of cryptocurrencies. By utilising Kyber Network, they are able to receive the currency of their choice.

According to their official website, Kyber Network supports over 45 DEXs, 20,000 tokens, and over 6 chains. On top of this, the platform allows you to pair your hardware Ledger device to the exchange, so you can safely swap cryptocurrencies from your wallet.

Even though the Kyber Network Crystal Legacy features a unique design, it shares the operational scope of similar DeFi projects, such as Uniswap, SushiSwap, and Curve.

The Main Features of the Kyber Network Crystal Legacy

This highly sophisticated functionality is achieved through three components of the Kyber Network: KyberSwap, Reserve, and KyberDeveloper.

Kyber provides a decentralized platform where traders can exchange cryptocurrencies. Most importantly, users can instantly swap a wide range of tokens of their choice in a P2P (peer-to-peer) manner, but they have to belong to the category of ERC 20 tokens or stablecoins like DAI, USDC, TUSD, or USDT.

Even though there are two participants in the trade, the user actually sends a request for the desired token to a smart contract. The contract automatically finds the token even if the other trader doesn’t own such a token. The best way to understand the exchange’s course of transfer is through an example. If Person A requests DAI (DAI) from Person B, but Person B owns only Wrapped Bitcoin (WBTC), the Kyber will convert it to DAI before sending it to Person A.

Now, let’s see how Kyber Network sustains the high liquidity necessary for “multi-dimensional” swaps. Kyber Reserve is the liquidity source for the network as it provides grounds for tokens to be placed on the platform. The Reserve is kept in function through reserve entities, reserve contributors, and the reserve manager. 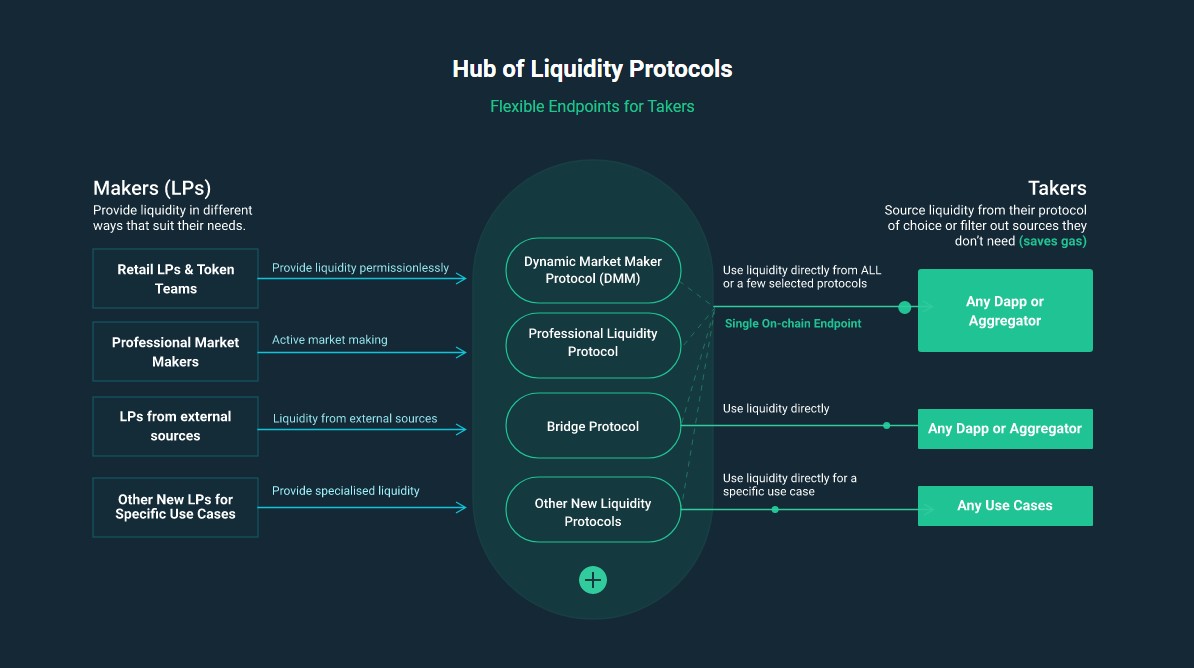 The Reserve entities are Kyber liquidity pools that can be either public or private depending on where their reserve contribution comes from. Public reserves are registered third parties entitled to contribute to their selected reserves, while private entities are Kyber insiders.

Reserve Contributors are Kyber liquidity pools that can be public or private depending on their reserve contribution.

Finally, the Reserve Manager maintains and supervises the reserve. At the same time, they make estimations of the exchange rates and spreads and forward them to the network system. There is only one reserve manager per reserve entity, and they earn decent incentives out of the spreads.

Thе third Kyber component allows external DEXs, dApps, crypto wallets, and other types of DeFi projects to be included in Kyber liquidity pools. At its core, the network serves as a host platform to other decentralized projects. So, when an individual user asks for a trade, the Kyber algorithms will go through the entire network to locate the most price-favourable reserve and take liquidity from it.

The Kyber native token KyberNetwork Crystal (KNC) is the centrepiece of all exchange activities. It serves as a bridge between liquidity makers and takers and has three clearly defined functions within the platform: 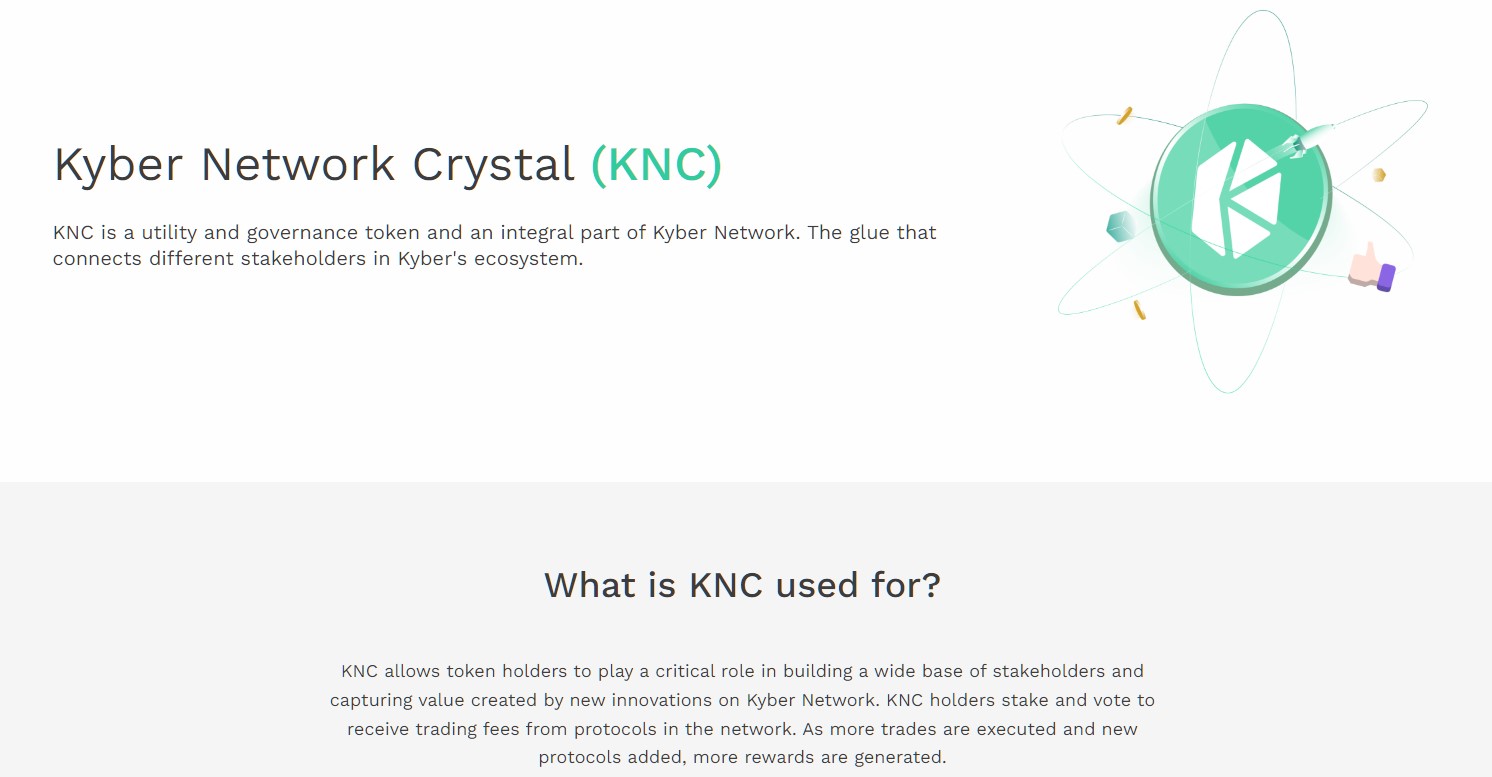 The company is planning to expand the KNC utility by offering opportunities for staking and making KNC a governance token for voting on system management parameters.

KNC was launched in a September 2017 ICO at a starting exchange rate of around 1 USD. 61% of the 226,000,000 total minted tokens were sold to the public at the event, while the rest was equally divided among the company and its advisors.

The Kyber Network charges nothing but a flat trading fee of 0.10%. This amount is in line with the industry average that ranges between 0.10% and 0.15% for crypto service providers of this type.

For any concern or potential issue, you can find an option on the KyberSwap platform for a support ticket. Based on the positive reviews prevailing online, it seems that the Kyber support team does a great job. Kyber users can also rely on a more dynamic means of support — social media.

Despite being a relatively young marketplace, Kyber has built a devoted community, which can be best seen on their Twitter account with over 100,000 followers, their Facebook page with over 7,000 supporters, and their subReddit channel with 7,300 followers. The Kyber community is active and rather supportive. 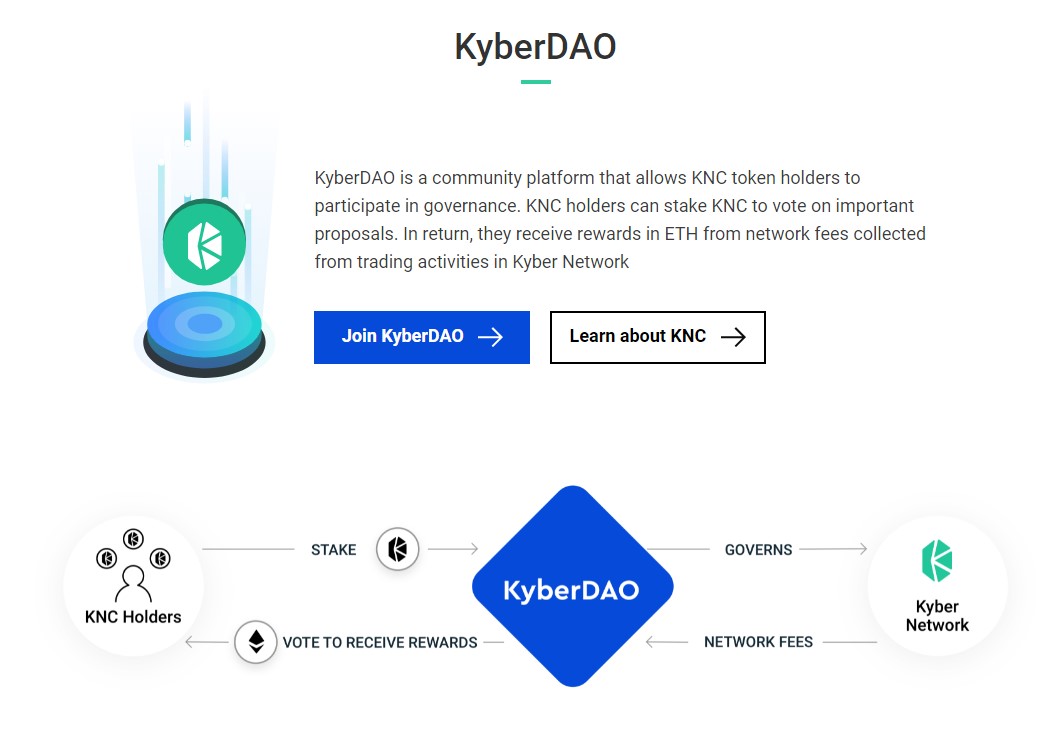 For news and updates, there is a range of online sources for news and updates, including the Kyber Blog, their YouTube channel, and their open GitHub account. There you can find out everything about the exchange’s new features, such as KyberDAO, a system for on-chain and off-chain governance that will strengthen the partnership between the Kyber team, KNC holders, and market participants.

What is Kyber Katalyst Upgrade?

Kyber aims to become the largest liquidity reserve in the blockchain realm. The first step towards this goal was the Kyber Katalyst Upgrade. This technical improvement of the Kyber platform helps it deal with specific liquidity demands in the DeFi ecosystem. Kyber uses the Katalys Upgrade as a free environment to earn trust from DeFi aggregators.

How can I deposit on Kyber?

Fiat deposits aren’t available on Kyber. If you don’t pre-own ERC20 tokens, turn to an entry-level exchange that will allow you to buy any crypto with AUD.

Where can I buy KNC tokens?

You can buy KNC tokens from several popular exchanges such as Binance, Okex, Huobi, and Coinbase Pro.

Where can I keep my KNC tokens?

KNC is a type of ERC20 token and can be kept in all ERC20-supported crypto wallets, such as MyEtherWallet or MetaMask. There is also a KyberSwap mobile app that was released in 2019 for Android users. This wallet app has drawn the attention of the growing community of KNC token holders as it enables instant swaps and supports more than 70 coins. On top of this, it allows users to set price alerts depending on their personal preferences and place market and limit orders.

A Few Words Before You Go...

Kyber offers one of the best solutions for swapping ERC20 tokens cross-chain without any liquidity concerns. You do need some experience with DeFi tokens and crypto trading to make proper use of all the developer-friendly functionalities that Kyber Network offers. But the Kyber interface is straightforward enough, so first-time explorers shouldn’t worry too much.

If you don’t consider yourself an active trader and just want to keep it simple by making a single investment in a Bitcoin or another mainstream altcoin, there are plenty of entry-level alternatives available for you in Australia.

Gareth is incredibly passionate about sharing his knowledge in the crypto industry. It's important to make informed decisions in crypto and it's Crypto Wisdom's goal to make this information widely accessible.

This page was last updated on